• Article 1 : « Human dignity is inviolable. It must be respected and protected. »
• Article 11 : « Everyone has the right to freedom of expression. This right shall include freedom to hold opinions and to receive and impart information and ideas without interference by public authority and regardless of frontiers. »
Charter of fundamental rights of the European Union 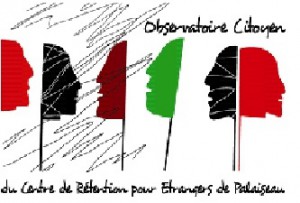 [EN] Today the Open Access Now campaign is relaying testimonies of foreigners detained in the camp of Palaiseau, in Paris. These testimonies are collected in order to shed light on detainees’ stories, detention conditions and access to rights.

These testimonies – presented as a chronic – were collected in Autumn 2014, by the Citizens’ Observatory of the Palaiseau camp, following parlor visits in the detention centre of Palaiseau. Testimonies have also been collected  by the Cercle des Voisins de Cornebarrieu (detention centre in Toulouse, France).

Citizens’ Observatory of the Palaiseau camp

B: “The lawyer suggested me to say that I wanted to go back to my country. I have not been able to talk about my boss, his job offer and my efforts to be regularized! In the Court, everywhere, it seemed like I had no chance to stay here.’’ So before yesterday, B. signed the “laissez-passer” to be returned to Mali. […] “My dream was to open a library in my country to allow children to learn, and ‘rise up’. I have many books in my bags and yet I cannot read … “[…]

Today is the voice of a voiceless named Ezzedine I. that we want to be heard. And here he is, a tall skeleton surprised to receive a visit from two ladies he doesn’t know, entering the small parlor room. Practically, he has not eaten anything since his detention. Ramadan is of course, a difficult period, but, even after, how is it possible to eat when you have no (or very few) teeth? Some of his detention brothers gave him their yogurt, but it is not enough. […] No complaints from this man. No way has he complained to his family, which sold the only cow they had in order to pay the smuggler. No one knows he is in a detention centre. And why not tell the reality about life in France? “No one will believe you back home… neither did I believe those who had warned me before I left” he responds. […]

I went back with Josette to see B. ‘’During the three hearings they said things that did not match with my life! The police and the ambassador don’t know me and yet they have copies of my documents! I told the judge; you will listen to me, now that I want to go home! Why do you give me 20 more days? You want me to suffer before I can go home!’’ […]

Ben: ‘’They wrote that I stole something and then ran away because I had no documents. At the Administrative Court I had no chance, nor at Evry. The court-appointed lawyer did not even talk to me. In the police station of Evry, were I was under custody, a policeman told me; you don’t stand a chance here and you will go back home… Too racist! […]

I:‘’I did nothing, I have never stolen. This is the first time in my life that I am arrested, that they handcuff me… I know nothing about police custody…’’ His job, he says, is in the restoration, but he worked under the table in restaurants as well as in constructions. Depending on what he finds. The road was long. In 2000, he left Congo, were he had nobody to take care of him, to pay for his studies. He became a mason in Douala, for 6 months, then went to Senegal, Morocco, and finally arrived in Marseille paying a smuggler between 2000 and 3000 euros: ‘’I lived in shelters. I’ve always been working. I’m confident; the day I’ll have documents, I’ll also have a job. ’’ […]

Aicha, 15 months old, is detained since 6 days, in the centre of Cornebarrieu, in Toulouse.

Since 2010, the Chechen family, Koudouzov, applied for asylum in France.  Even though their application was rejected, they managed to build strong ties in Perpignan. The Prefecture in the Eastern Pyrenees refuses since then to regularize and persists in trying to deport them. After the first attempt of deportation the day of the arrest, the family resisted once again the night of October 16 to 17 at 4am under particularly violent conditions. Since then, they are detained in the centre of Cornebarrieu, in the building for families, which is not a suitable for early childhood. […] The ECHR (European Court of Human Rights) seized of this matter, called on France to suspend deportation, pending examination of the application on the merits (within a month or two!) […]

In attachment, the full version of these testimonies (in French).

Each testimony is presented in respect of image rights and private life. With this aim, the members of the Open Access Now campaign diffuse the collected testimonies anonymously and with a delay – depending on the maximum length of administrative detention in each country.