• Article 1 : « Human dignity is inviolable. It must be respected and protected. »
• Article 11 : « Everyone has the right to freedom of expression. This right shall include freedom to hold opinions and to receive and impart information and ideas without interference by public authority and regardless of frontiers. »
Charter of fundamental rights of the European Union

C(h)amp d’expression: ‘’We are going to meet a Syrian…Oh yes! We detain Syrians too!’’- Administrative Detention Centre of Vincennes (Paris, France) 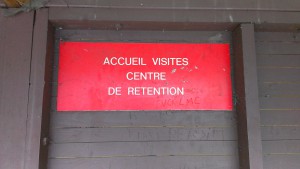 [EN] Today the Open Access Now campaign is relaying testimonies of foreigners detained in the camp of Vincennes, in Paris. These testimonies are collected in order to shed light on detainees’ stories, detention conditions and access to rights.

The testimonies were collected in 2014, by the Citizens Observatory of the Vincennes camp, following parlor visits in the detention centre of Vincennes.

A. comes from the city of Hama in Syria. ‘’He decides to reach Europe by boat. He spends 12 days, with 50 other people, including women and children. They travel under terrible conditions, suffering from the lack of water and are finally rescued by the Italian coastguards, who disembark them in Sicily. Since he wants to leave Italy, they set him free, and so, he finds himself in Paris (Gare du Nord), with one of his compatriots. His compatriot is released, while A. is taken to the detention centre of Vincennes. In fact, he has no passport. Afraid of losing it at sea, he left it in Egypt and brought with him only the scan of the document, which was not trustworthy!’’

‘’D.T. is one of those foreigners living in a total impasse in France. He arrived in 1998, his asylum application was rejected, so he has been living ‘undocumented’ for almost 16 years: ‘undocumented’ for France, ‘undocumented’ for his country of origin and above all without a passport. D.T. was controlled by the police in the RER station of Chatelet (in Paris). He presented his transportation card (pass Navigo), but he was also asked to present his identity card…which he didn’t have. He was held under police custody for 48 hours, without any court decision, and while ID control may not exceed 16 hours for a foreigner.’’

‘’I.M. has already been arrested once, but was immediately released. This time the arrest was brutal (he still has the marks on his body), and the judge asked him during the hearing: ‘Why don’t you go back to your country?’ Such a question from a representative of ‘the country of human rights’ was a real shock to him.’’

‘’ During the conversation, we learn that M.R. arrived in France at the age of 14. He is married and has 2 ‘Gallic’ children. As his presence in the detention centre surprises us, he tells us that he has been directly brought here, after his release from the Fresnes prison. His situation is complicated, since in 1990, following a robbery, he was imprisoned and subject to the double penalty (so-called law Pasqua). After 16 years (in 2006), he received a banning from the French territory. M.R. never went to school, and learned French in prison. Today, he is very well aware of the reality in detention; he has been detained among others in the Mesnil-Amelot camp but, as he says: ‘Vincennes was not in my successes’ list! ’’

M.B. ‘’In any case I will come back in France: it’s the Schengen area. I was working with a friend, who has been regularized 2 months ago. He seeks a job, but nobody wants him; so…he went back to his former employer, who re-hired him under the table!’’ Finally, M.B. thanked us for our visit, and told us that it is important for the detainees to know that not all French people are racists and some of them are opposed to the current policy. If not, they would hate France, and that could be dangerous.

In attachment, the full version of these testimonies (in French).

Each testimony is presented in respect of image rights and private life. With this aim, the members of the Open Access Now campaign diffuse the collected testimonies anonymously and with a delay – depending on the maximum length of administrative detention in each country.